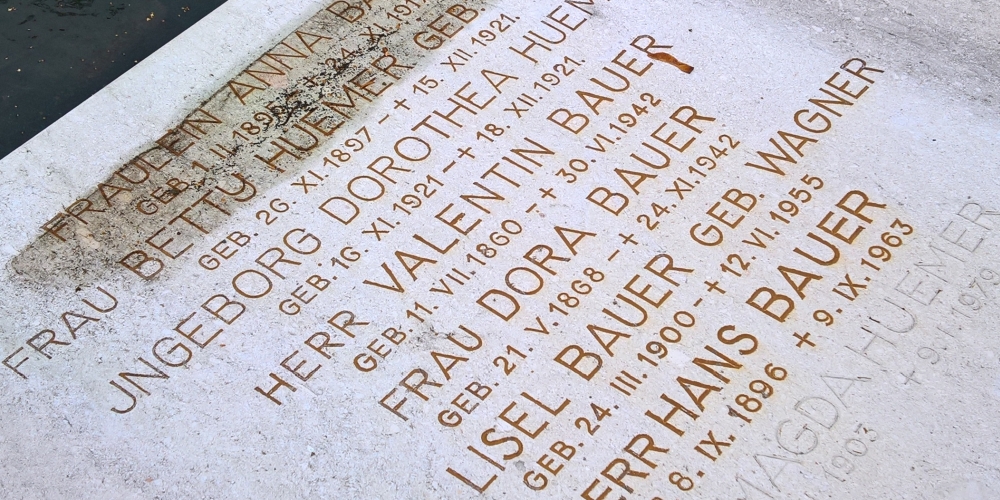 Here I will write about surnames in Germany. That this can be interesting, I have noticed several times. For example, when a friend from Ethiopia told me that he always wonders what qualities the ancestors of a person named “Stein” (stone) must have had. Or when I talked to a Portuguese about the regulations in Germany, which differ from Portugal or Spain, where you have 2 surnames. Or when I learned from a Syrian that in Arab countries it is common for a woman to keep her name while marrying, but the children are given the surname of the father. Or with a Korean about the prefix of the surname, which also exists in Germany in a region of dialect. Because I realized that there are very different concepts in the world, I would like to give an overview here.

In general, a distinction is made between first and last names.

Robert Behrendt -> Robert is the first name, Behrendt the last name (or surname or family name)

The last name is inherited from the parents. The first name is chosen by the legal guardian. There are precise laws for both in Germany.

They are also very committed. To change names is quite difficult in Germany. It has to be applied for at the state administration and is only approved in exceptional cases. For example, surnames, if they sound very offensive or ridiculous (for example, “Fick” -> that has nowadays the meaning of “fuck”), or if they are extremely long and difficult to pronounce and write. Sometimes if they can be confused very easily. So, you have to have a good reason to be allowed to change your official name.

Origin of family names in Germany

The surnames are mostly from the Middle Ages. Until about 500 to 800 years ago there were practically only the first names. The persons were mostly named with their occupation (“Bauer” -> farmer, “Fischer” -> fisherman, “Müller” -> miller), a personal property (“Klein” -> small, “Gross” -> large, “Schön” -> beautiful, “Alt” -> old, “Braun” -> brown-haired), or their place of residence (“Bach” -> at the brook, “Berg” -> at the mountain). From the Middle Ages, these surnames were slowly written down, so noted in documents and inherited to the children. For a long time there are many Slavic names, from people that have ancestors from East-Central and Eastern Europe. These are names like “Nowak” or “Kowalski”, which are especially recognizable because they are very complicated to write. In the last hundred years, of course, names from Europe and its neighborhood, ie Italian, Turkish, French, Greek names have been added. In the future, the share of Arab, Persian and African consignations will probably gain in importance.

occupation of an ancestor

With the establishment of the surname, typical professions from earlier times were preserved. Since industrialization, however, there are no longer many professions. For example “Böttcher” or “Köhler”. Others are still known – although there aren’t many left (e.g. “Schmidt” -> smith). Still others are timeless (e.g. “Koch” -> cook).

personal look of an ancestor

To describe people, you also describe their bodies. Even if the descendants of these people look very different, these names are very common.

place of residence of an ancestor

Names that indicate the place where people lived. This was mainly done because the profession of farmer was so common. That is why one has simply given the place of residence for better differentiation of the people. Anyone who lived by a stream (“Bach”) was called “Bachmann”.

first name of an ancestor

Some first names have also become surnames. Thus the person was named as the son of “…”.

origin of an ancestor

Due to the close connection in the East Central European area (especially today’s Poland) there have been many Slavic names for centuries. Approx. 8-9% of the family names in Germany have a Slavic origin. They typically end on -ak, -ow or -ski.

Huguenots were French Protestants who were expelled from France by the Catholics. That was about 300 years ago. You have found a new home in many Protestant areas of Europe, including the Protestant countries of Germany.

Immigration of the past 70 years

Many Turkish names come from immigration in the 20th century. “Yilmaz”, “Öztürk” or “Erdogan”, for example, also appear relatively often in Germany. With around 3 million Turks and Germans of Turkish origin, one can assume around 3 – 3.5% Turkish or Kurdish surnames. There are also notable numbers of Italian, Greek, Spanish and English-American family names.

For a long time, the nobility were the secular social leaders in Germany. There were titles of nobility that arose from certain functions, such as “Graf”, “Freiherr” or “Ritter”. The titles were later inherited. The place of origin of the family is usually indicated with the “von” (from) or “zu” (to the).
Since the end of the monarchy in Germany in 1919, members of the nobility no longer have any privileges. The nobility titles and names, which previously indicated rank and position, simply became permanent surnames.

But there is one special feature. With the titles of nobility there is the exception that the male and female form may still be used.

That someone has a noble name today only shows something from the history of the family. Legally, someone with a noble name is a perfectly normal citizen.

Memorial for Valentin Becker. The reader now knows whats the origin of “Becker”

Rules for family names when getting married

In the case of marriage, the classic case is that the woman takes the man’s last name. This is also the centuries-old tradition that was required by law until the 1960s / 1970s. Today you can choose whether one partner takes the name of the other or whether both keep their own surname. One of the two partners can also have a double name. After a divorce you usually have the right to use your old name again. Own creations, i.e. mixtures of names, are not allowed. For foreigners who live in Germany, the naming rights of their home country can also be used when they marry.

For example, if Martin Müller and Anne Schmidt get married, they have the following options under German law:

Incidentally, triple names are not possible! The Federal Constitutional Court decided on May 5, 2009. So you cannot “collect names” through several marriages and be called e.g. “Schmidt-Müller-Stein”.

At the end of the 19th century, in the German Empire in 1875, civil marriage was introduced. Since then one can speak of general rules throughout Germany. With the BGB of 1896 it was regulated by law that (according to tradition) the name of the man automatically becomes the family name at the time of marriage.

There was a change to this in 1966 in East Germany (GDR) and from 1976 also in West Germany (FRG):
Either the name of the man or the woman was determined to be the family name that the children also receive. If desired, one of the two spouses could combine his previous married name with the new married name. Double name, e.g. Schmidt-Müller. It was not possible for both of them to keep their names. It should be noted that the laws in the two German states were changed with a difference of 10 years. Socialist East Germany was faster than liberal West Germany in terms of women’s equality.

In 1991 it was decided in reunified Germany that both could keep their own names. It was also possible to have a double name for both people. As early as 1993, however, the option of using common double names for married couples and children was withdrawn.
The current rules have been in effect since 1993.

Passing on family names to children

If the parents are not married: For children who are not born in a marriage, the children are usually given the mother’s name. However, the child can also take on the father’s name if both parents have custody.

A double name cannot be passed on to the children. That was only possible from 1991 to 1993. Lena Meyer-Landrut, who won the Eurovision Song Contest 2010 for Germany, is one of these exceptions, she was born in 1991 and has the double name of her father.

Anne and Martin have a daughter, Leonie. Depending on the name of the parents, there are the following options for Leonie’s last name:

Mr. Schmidt did not choose the profession of his medieval ancestor. He didn’t became a smith, but a butcher.