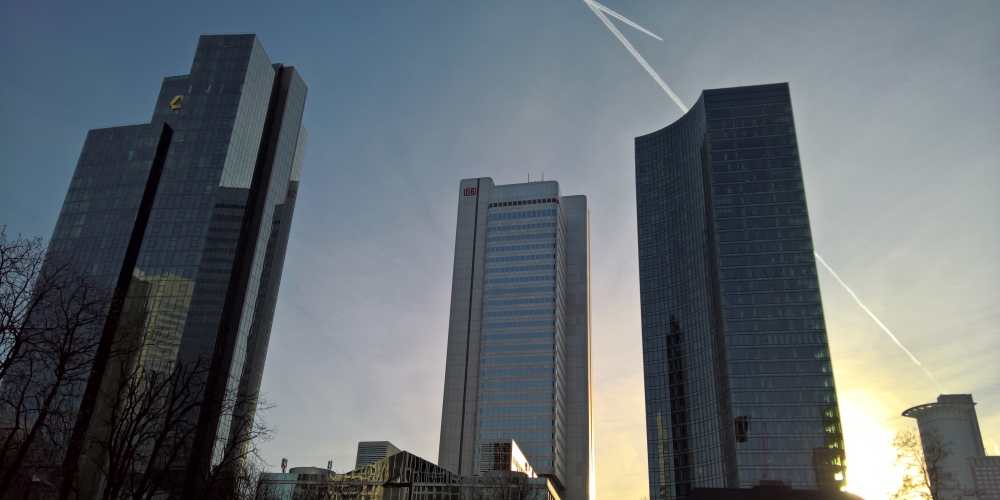 One of the first questions I asked my friend David from Australia when I met him was: “Which bank do you have your account at?”. This was because I bought shares from Australian banks shortly before (I was actually a co-owner of his Australian bank). We often exchange ideas about stocks, cryptocurrencies and the like. At the beginning I talked to him about accounts at German banks. Then, in the middle of the Corona stock market crash, we talked about the opportunities for investments. That was the impetus to write about stocks and stock culture in Germany.

How does a stock work?

Companies have owners. If there are several owners, then each has a certain share. How property rights are organized is very different. Companies based on stocks are one way of doing this (stock: german “Aktie”).

Public companies (based on stocks) are divided into thousands or millions of shares. So a share is a (tiny) part of the company. They are traded on exchanges, so they can be easily bought and sold. And this by everyone (people or other companies). Unlike other companies, you do not need complex purchase contracts and agreements.

Example: Company X consists of 100 million shares. (A person with brown hair has about 110,000 hairs on their heads. That would be the number of hairs of 909 people)

Businesses (if things go well) have profits. The management of the company makes a proposal as to how much of it should be paid to the shareholders. The shareholders jointly decide whether the money will be distributed to everyone. The money goes straight to the account. In Germany, this typically happens once a year, around April and May.

The “general meetings” usually take place in spring / summer. It’s like “the company’s parliament” in which fundamental decisions are taken. You have one vote with each share. You will be invited there, even with just one share. You can also submit your own applications and ask the board questions that they have to answer. So it’s actually like a democratic parliament. The difference is that not every person has the same voting right, but the person has as many voting rights as they own shares.

In Germany you pay taxes on income. Income can be: wages / salary, interest received or dividends (investment income). The tax rates are different. Whoever earns more also pays a higher percentage. The tax can be deducted immediately for investment income. You then pay 25% on profits and dividends.

Up to € 801 per year are tax free. If you can only invest a little bit, you don’t have to pay any taxes. To do this, you have to state the “Freistellungsauftrag” (exemption order) at the bank. https://www.finanztip.de/freistellungsauftrag/

Don’t worry: you don’t have to do the math yourself. The bank does it for you!

If you hold shares in foreign companies, you also pay taxes abroad. That will be deducted automatically. You can get part of it back. (Is complicated. Information in german here: https://www.finanztip.de/indexfonds-etf/quellensteuer/)

With German shares, there are sometimes two types of shares for a company. These have the addition “Vz.” or “St.”

How do I buy stocks?

You need a stock deposit. The shares that you own are listed there with their number, purchase price, current price etc. You can create buy and sell orders (in german also “Order”) with which shares or other securities can then be bought / sold. Fees also apply. For a purchase / sale you pay around 10 €. Very cheap providers start from € 4.

You can either open the deposit at a bank or use a special platform (online broker).

For recommendations at which bank or provider you should open it, you should have a look at finanztip.de: https://www.finanztip.de/wertpapierdepot/ (in german). Finanztip is an indipendent foundation for consumer information on financial topics.

Funds: You buy shares either individually or in funds. Funds are a package of stocks. You buy shares in the package. This has the advantage that you have shares in many different companies. That lowers the risk and you don’t need a lot of clue about the individual companies. “ETFs” are very popular with the funds because the fees are not high there.

saving plans: Its when you automatically invest a certain amount of money lets say every month 100€. Then you buy an etf on an average price over time. You dont have the risk to invest all your money when the price is high. And you dont have to care because its automatically. Usually you can stop or change it when you want. Its called saving plan, because you normally have an plan like “in 15 years I want to have invested an amount of X€). There is also an tax-free “help” of employers for this (if they offer it). Its around 20€ per month. “Vermögenswirksame Leistungen”. These are just possible with some ETFs. And not to forget: its with less fees than buying ETF’s each month.

How common is ownership of shares in Germany?

Unlike in other comparable countries, very few hold shares in Germany at all. This is attributed to historical experience: loss of assets during hyperinflation in the 1920s, losses due to war, at the end of which financial assets were less important than food and other means of exchange, and losses in the past 20 years. State-owned companies were privatized in the 1990s and it was promoted that private individuals invested in them. For example, the Telekom share. They had bought a lot of them, but after the dot-com bubble burst (stock market crash in 2000) the shares fell and have not recovered since then. For many, that was when they started buying stocks. They have had bad experiences and never touched stocks again. At the same time, the money in the account brought in even more money – and without risk than interest. Germans are simply concerned with more security and less risk. Returns should be guaranteed, even if they are low.

Another factor is that the welfare state is so extensive that it was not necessary to build up private financial assets for old-age provision for a long time. The pension has always worked. The state redistributes a lot of money. Therefore, the individual has less to provide for on his own. As a result, there was no need for equity investments for a long time. It has only become apparent in recent years that it is no longer working as well due to demographic change. Less and less young people have to pay for more and more older people. But people still haven’t realized how important e.g. Shares are. (The same principle also leads to the fact that many people live for rent and do not own the apartment themselves. Tenants have comparatively many rights in Germany. Therefore, you don’t need a condominium to protect yourself from the arbitrariness of landlords.)

In Germany, stocks are associated with speculation and the extremely wealthy. It is hardly seen that it is simply shares in companies. Anyone can participate in their profits.

Many German companies are very successful and operate internationally. But more than half of the DAX companies have foreign owners.

Only 11% of Germans own shares. Most of them are pensioners. They hardly have any younger ones, and most people hardly know how it works.

Which companies are based on shares?

Companies that are owned by several people are simply described as “societies”. A distinction is made between partnerships and corporations. A corporation exists theoretically independent of the people who own it. It is actually “a lot of money that someone owns”. Companies have a legal form, it is the external form of this “pile of money”. Shares issueing companies with a specific legal forms are:

SE
Societas Europaea – SE is also widespread among very large companies. This is a legal form in the EU. This makes it easier to operate in the various EU countries.

Exchanges are trading venues on which securities or raw materials are traded. All of this is now done electronically, all over the world. But there are also real places that have meaning. Such as. Wall Street in New York where the “New York Stock Exchange” is located. The most famous stock exchange in Germany is Frankfurt.

Stock indices show the development of many individual stocks. With just one number, you can tell whether an entire industry or company in a country is losing or gaining value. The best known is the “Dow Jones Industrial Average” or “Dow Jones” for short, which shows the 30 largest companies in the USA. The “Deutsche Aktien Index”, or “DAX” for short, is known in Germany. But there is more:

My personal view on the importance of stocks

I myself have built up a little knowledge over the years and invest in stocks myself. I am invested in most of my examples. But I leave it at very classic stock purchases and do not “bet” or speculate. I buy shares in companies that I am confident in business and that pay a good dividend. I want to be part of the profits in the long term. It is retirement provision and an exciting hobby at the same time.

With shares, everyone can participate in the global economy. And not just as a consumer, but also as a producer. You don’t need to buy an entire company or property, you can do it in small units. For example, if you don’t have the money to buy and rent an entire house, you simply buy a share in a real estate company. This also does all the bureaucracy and you get dividends directly into your account. Or you can buy shares from your own mobile operator, for example. So you can get back the money that you pay annually as fees as profit distributions. You are a customer of your “own company”.

In conclusion, stocks are a means of democratizing the economy. They are perfect so that property and profits are not in the hands of a few, but as many people as possible.

Germany for beginnerswork and economy