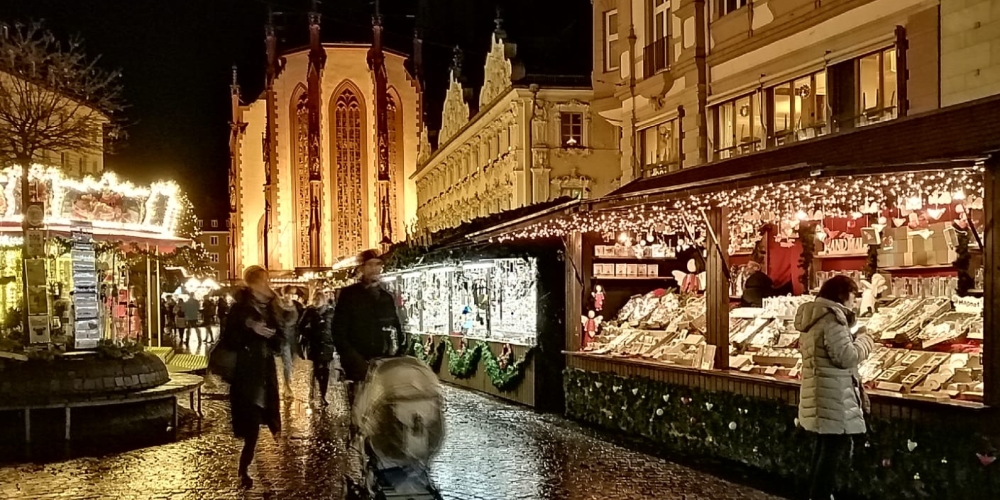 I would like to give an overview of the Christmas season and Christmas itself with some of its customs. I can only show a section, because there are many regional features of which I don’t know myself. Each family also has its own traditions and procedures. In addition, I am not a Christian, so Christmas for me has less to do with religion, but more with family and rest in the middle of winter.

Christmas, the Christian festival celebrating the birth of Jesus Christ, is more precisely the 24th of December (Christmas Eve / Heiligabend) and the 25th and 26th of December (1st and 2nd Christmas Day /
1. und 2. Weihnachtsfeiertag). The weeks before are called pre-Christmas time.

This Christmas season (Weihnachtszeit) really starts with the first Advent. The 1st to 4th Advent, these are the 4 Sundays before Christmas. There is the custom to set up an Advent wreath. Traditionally it consists of fir green, on which there are 4 candles. Each Advent Sunday, another candle is lit. Fir green, like the Christmas tree, are classic decoration. They symbolize as evergreen plants (also over winter time) the nature / the life / the spring after which the people long back.
Of course, the advent calendar with its 24 doors must not be missing. The classic version of our time is filled with small chocolate figures. But nowadays, everything can be in there. Cosmetics, literature texts, tea or sex toys for adults. You can also make a calendar from a box of beer. The imagination knows no limits. The basic idea is 24 little surprises every day from December 1st to 24th to make waiting easier. Although impatient and addicted to chocolate open all 24 doors at once to eat the chocolate.

December 6 is St. Nicholas Day (Nikolaus). In Germany there is already a foretaste of Christmas on this day by giving small gifts. There is the following custom: the children clean their shoes or boots and put them outside the door overnight. The next morning, the shoes are filled with small gifts: But only if they are well cleaned, because diligence is rewarded! Who does not clean his shoes properly gets nothing. In addition to shoes, in some places plates are set up overnight. Nowadays children almost always get something, even if they were not good. It has developed to the fact that there is a Nicholas in kindergartens, elementary schools or similar places a Nicholas who brings small gifts. It’s because at Christmas, the people won’t meet. In early times, Nicholas brought the actual gifts on December 6th. However, the messing (Bescherung) has wandered into Christmas in Germany as well as in other countries. Then Santa Claus or the Christ Child (depending on the region) brings the presents. In English-speaking countries, the gift-bearer is also called Santa Claus and comes for Christmas. Not only the name, but also the secret delivery of presents at night corresponds to the German tradition. It is not boots or plates, but stockings in which the gifts are placed. The idea is the same – only the appointment is different.

Christmas parties (Weihnachtsfeiern) are among the obligatory things in clubs, businesses and other organizations and groups to have a Christmas party. The occasion and thought is the same, it is also a joint meeting at the end of the year. Otherwise, they can have very different moods. It can be a cozy coffee-drinking in the old people’s home or a common restaurant visit of a company or department. Or a big party of the company or association. Especially with companies, this is one of the few occasions when you organize a party with all your colleagues. It is usually funny to “extremely funny” ;).

In the pre-Christmas period, one often speaks of “Weihnachtsstress”  (english: “Christmas stress”). This arises through the preparation of the festival. Especially by getting gifts or organizing trips or Christmas dinner.

For Christmas cookies (Weihnachtsgebäck) only the following: There are many different varieties, sometimes known only regionally. Everywhere but are known cookies (german special name: Plätzchen), Stollen, gingerbread (Lebkuchen), cinnamon stars (Zimtsterne), specula (Spekulatius) …In the shops, Christmas cookies are usually offered at the end of October. The early date has nothing to do with tradition, but with sales. Home-made, it tastes almost always better. Especially nice is the Plätzchen-cookie baking at home.

Christmas markets are mainly in German-speaking countries, Germany, Austria, Switzerland. They take place during the pre-Christmas period, ie the end of November to the end of December. Traditionally, they are already finished before the actual Christmas days. Most of the time they close for 22/23. December. You visit them with family or friends. In festively decorated stalls you can find delicious food as snacks, you drink hot drinks and can look around for small gifts.
Normally you are not outside for a long time at this time of the year – but in this occasion its comfortable in cold temperatures. You will find a quiet, pleasant atmosphere that you can just enjoy.

Depending on the size of the city there are bigger and smaller Christmas markets. Very large cities often have several ones in different parts of the city. The smaller markets in small towns usually do not last long. They often take place only a few days or a weekend instead. But they are often more comfortable and organized by the local residents. There are lots of little things to eat. The classics are bratwurst, roasted almonds, waffles and hot chestnuts. Usually you drink mulled wine. This is hot wine with spices and sugar (cinnamon, cloves, lemon, etc). Usually it is red wine, but there are also white mulled wine. Who ordered “Mit Schuss” (“with a shot”) receives some rum or Amaretto in the mulled wine. If you like it without alcohol, you can drink a punch or a fruit punch (“Früchtepunsch”). It’s also common to warm your hands on the hot glasses.

You can also buy presents and decorations at the Christmas markets. It is of course very nice when they sell hand-crafted things. These are often available on special smaller markets. Of course, there are always differences and special orientations. For example, medieval markets where you can drink warm mead. There are also markets with many rides and annoying music. Traditional markets can be recognized by the fact that no music or only live music is played. Christmas markets often have proper names such as the “Dresdener Striezlmarkt” or the “Nuremberg Christkindlsmarkt”.
For a visit I personally recommend the Christmas market in Erfurt.

What is the origin of the traditional decoration?

The Christmas season in December is the time in which the days are shorter and therefore there is little daylight. The shortest day is the day of the winter solstice on 21th or 22th of December. On this minimal short day pass from sunrise (about 8:15 clock) to sunset (about 16:15 clock) only 8 hours. Therefore, the decoration with light is especially common. You have been longing for the light of the sun for a long time now. With Christendom, Jesus Christ was added as “light in the dark world”. It is also the time when all the leaves of the deciduous trees have fallen off. It is (normally) cold and it can snow. In this situation, conifers have a special meaning. They are evergreen plants and the only trees that remain green even in winter. They have therefore become a symbol of life and a return of spring. Branches of coniferous trees such as fir trees have become a classic decoration. The same goes for mistletoes.

So also the Christmas tree in Central Europe, in Germany, has become part of Christmas. In some parts of Germany it is also called “Christbaum” instead of “Weihnachtsbaum”. Things are hanged on for decoration. In ancient times, food was hung on him. How it is decorated is left to the imagination, taste and style. The important thing is that he has a tip!
Precisely because ecological thinking is widespread in Germany, a real tree is preferred. Real trees are authentic, plastic trees are sometimes practical, but definitely not nice! In public places it belongs to the normal Christmas decoration and stands during the entire Advent season. In private, in the family, he is traditionally set up and decorated privately on Christmas Eve or the days before. It was bought fresh a few days earlier, in DIY stores, supermarkets, on Christmas markets or directly on the Christmas tree plantation.

Special thanks to Gayane Karapetyan for the Photos (inclusive featured image)